For retro enthusiasts, finding legitimate modern ways to experience games from 40 or more years ago can be a daunting task. Sure, most of the popular ones have been repackaged and released in various collections or mini consoles throughout the years, but what about some of the more obscure titles that nobody seems to remember?

Blaze Entertainment heard those pleas, and while its Evercade platform offers a vast library of titles spanning decades of arcade and home consoles to collect and play, the handheld itself leaves much to be desired.

Right off the bat, the Evercade has a distinct retro aesthetic that’s oozing with ‘70s and ‘80s vibes. It features an off-white exterior with striking red trim and grey accents. The face has a glass-like plastic finish and it’s all tied together with smooth, rounded edges. It includes four face buttons as well as start and select on the right side of the screen with a rocker-style D-pad and menu button on the opposite side. All the buttons feel great to press with the D-pad specifically “designed to feel like classic consoles.” 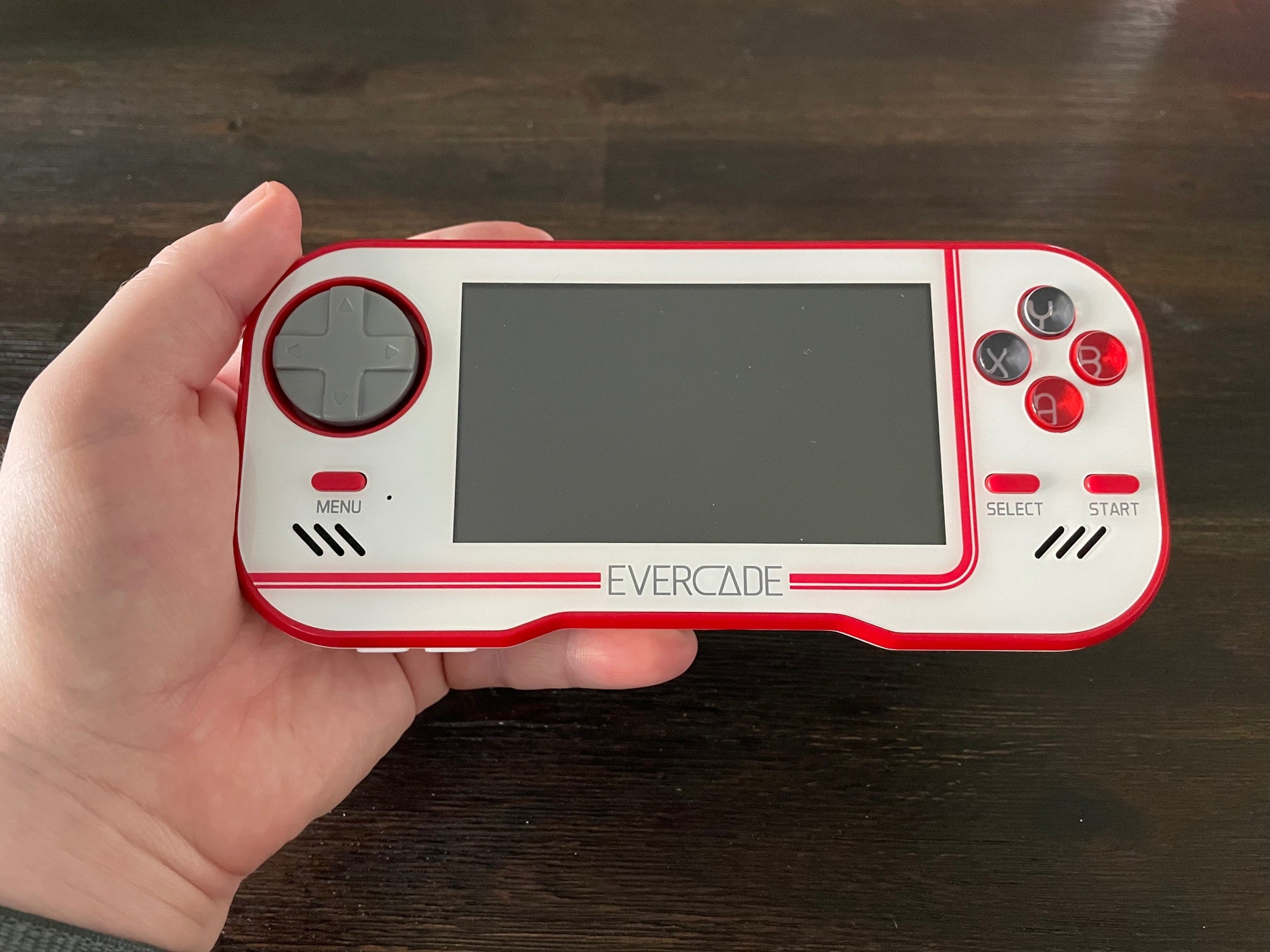 On the top of the handheld are two very low-profile shoulder buttons that unfortunately depress way too easily – I would constantly find myself pressing them and hearing the audible “click” while just holding the device naturally. Thankfully, most of the arcade-era games don’t utilize these buttons, but for the games that do it led to some frustration and required me to rest my index fingers behind the shoulder buttons so as not to accidentally press either one. Even worse, the right shoulder button frequently got stuck, which is a bit concerning right out of the box. There’s also a power toggle switch and a micro HDMI output for connecting the device to your television and using the Evercade Handheld as a controller, although this less-common cable is not included in the box. On the rear, there’s a large open slot for the Evercade cartridges, which become flush with the unit once inserted, making for an inconspicuous, seamless look. 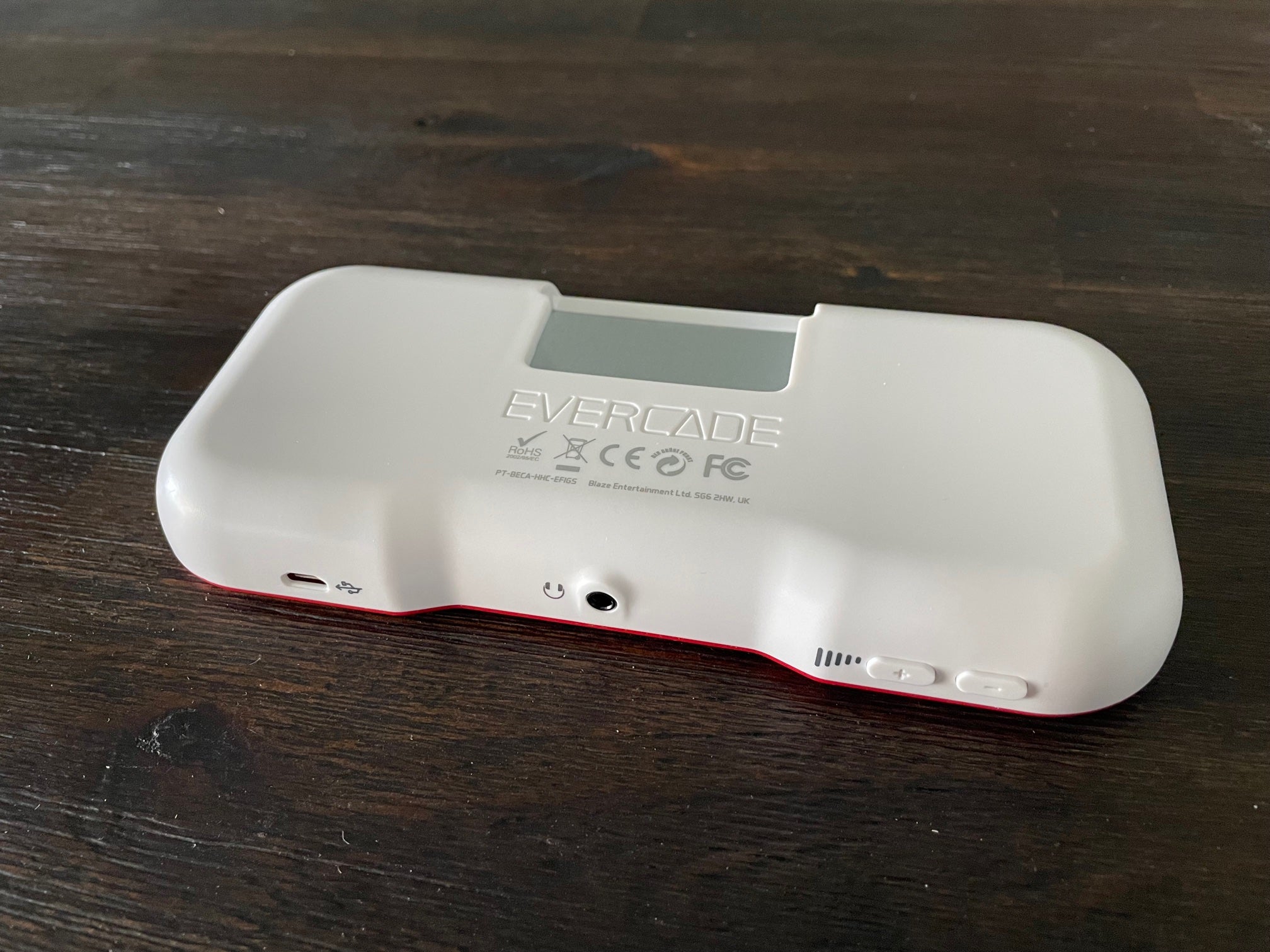 Across the bottom are two volume buttons, a headphone jack for connecting a pair of wired headphones, and a micro USB port for recharging the internal battery. You can expect to get roughly four hours of battery life on a single charge, and during my testing I found this to be accurate. One nice feature to prolong the device’s battery is that the display will automatically turn off after about 30 seconds of inactivity, only to instantly wake when any button is pressed. 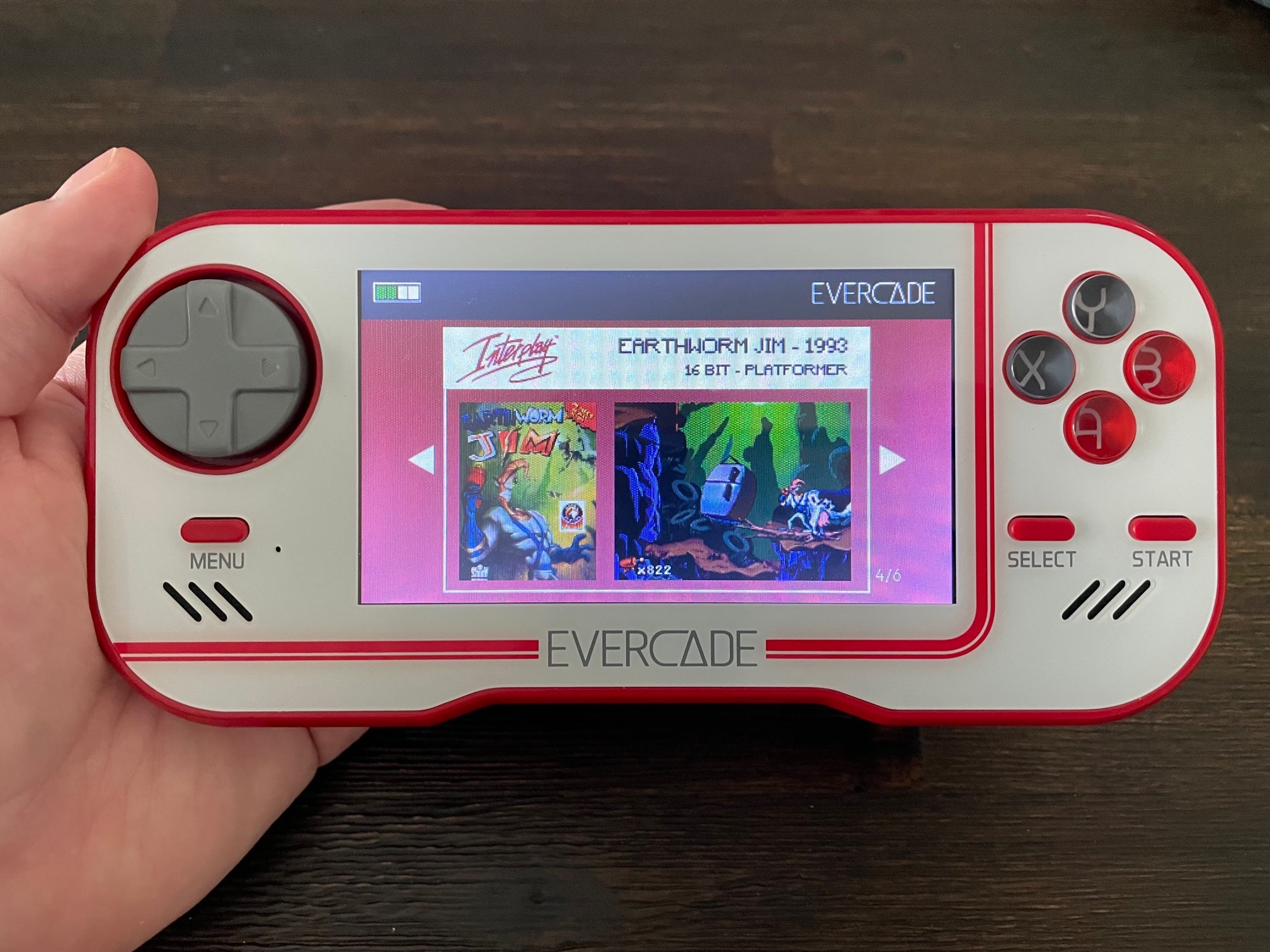 Speaking of the display, the Evercade Handheld features a 4.5-inch widescreen with a 480 x 272 resolution. That said, since most of the games use a traditional 4:3 aspect ratio, the widescreen feels a bit wasted outside of the system menus. Resolution aside, the display is very low-quality with terrible viewing angles. Looking at it straight on is fine, but the slightest tilt causes the display to become noticeably darker. Tilting it down roughly 45-degrees causes the colors to become completely inverted, something I haven’t seen in a handheld device since what feels like the ‘90s. For a sub-$100 handheld device it’s clearly not going to compete with the likes of the Nintendo Switch or even modern smartphones, but this screen technology still feels completely outdated in 2021. 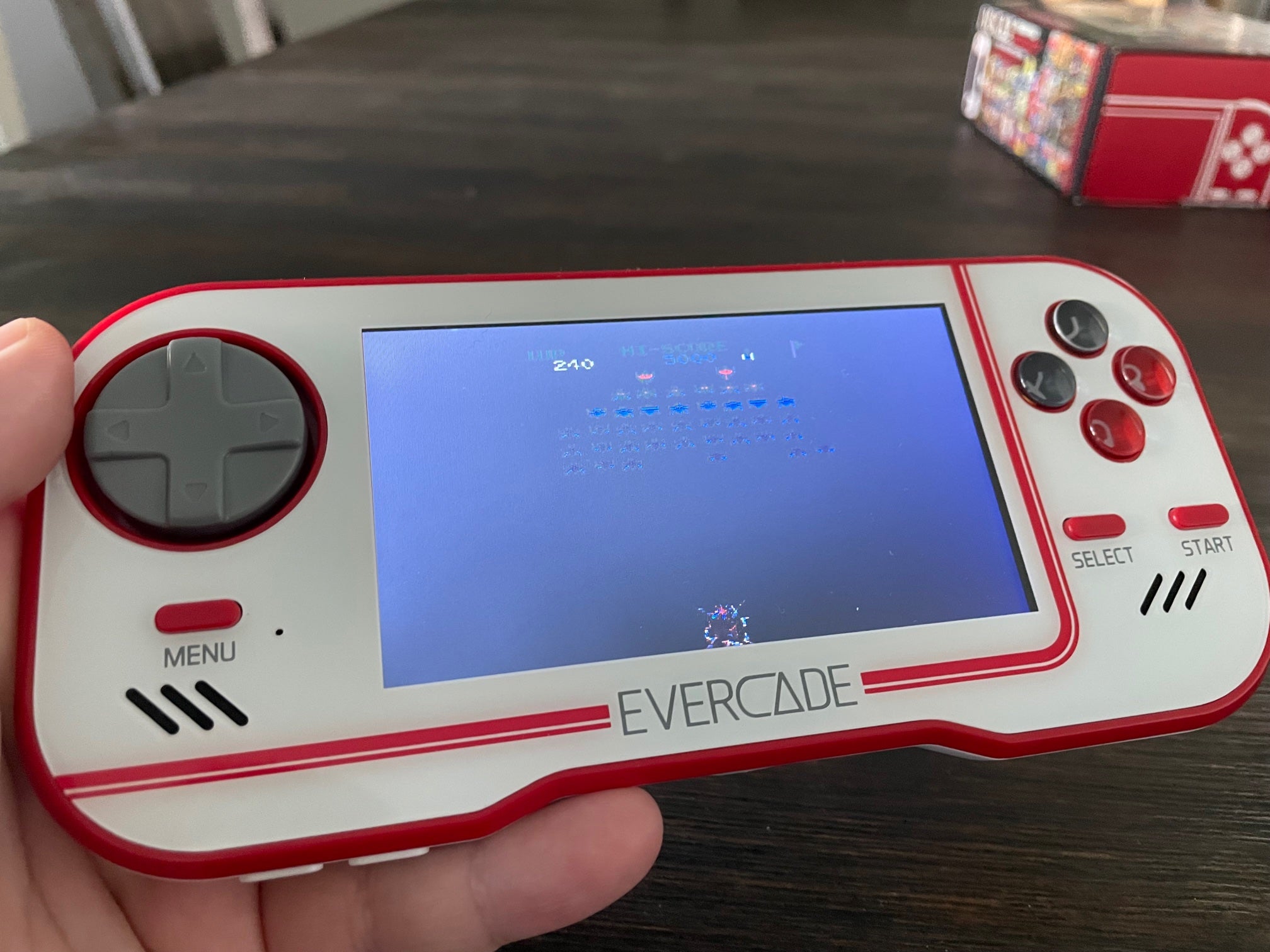 Evercade features a library of retro and arcade collections housed on proprietary cartridges that can only be played on the Evercade Handheld or the upcoming Evercade VS home console. These carts are roughly the width of a GameBoy cartridge, but about two-thirds the height with a rounded edge that sits flush with the handheld when inserted. Each cartridge features a small collection of games, some with just a couple, some more than a dozen. Most game collections are grouped by publishers such as Atari, Namco, and Data East, just to name a few. Currently, there are 26 collections containing more than 280 games spanning arcade games as well as various home consoles. In other words, you can expect roughly 11 games per cartridge, on average. With each cartridge costing 15 pounds (or roughly $21 USD) it’s a decent value and for many of the games, the only way to play them on a “modern” console. 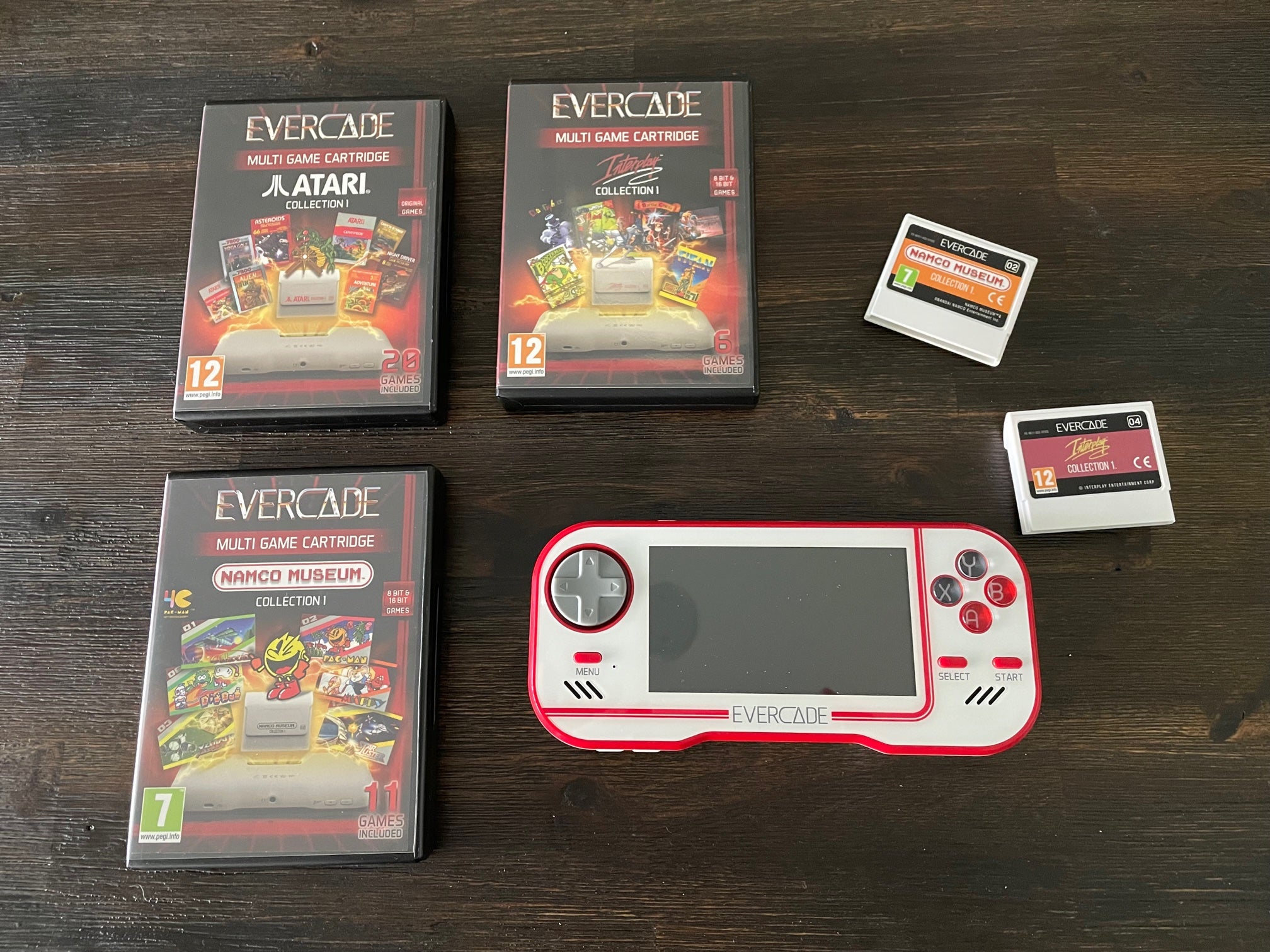 While many of the usual suspects are present, such as Pac-Man, Galaga, Asteroids, and Double Dragon, far too many of the games are filler titles and likely won’t see much play time. Furthermore, many of the popular titles are split across different collections, requiring you to buy multiple cartridges if you want to play a handful of favorites. (Seriously, how did Mappy Kids make it into Namco Museum Collection 1 over Galaga) Regardless, Evercade is clearly marketed towards collectors and retro enthusiasts, and the neat little numbered cases would look great on a shelf. It’s hard enough to collect retro games as it is, so having a company dedicated to packaging them for you is a nice bonus.

After inserting your desired cartridge, you’ll browse through the menu that includes each game’s box art, screenshot, year of release, and genre. You can also change the aspect ratio from 4:3 to 16:9, if you prefer, as well as adjust brightness and change between six different languages. The only thing missing from the main menu section are the controls for each individual game. Instead, this information is contained within a booklet inside each collection’s case, along with screenshots and tips for each game. 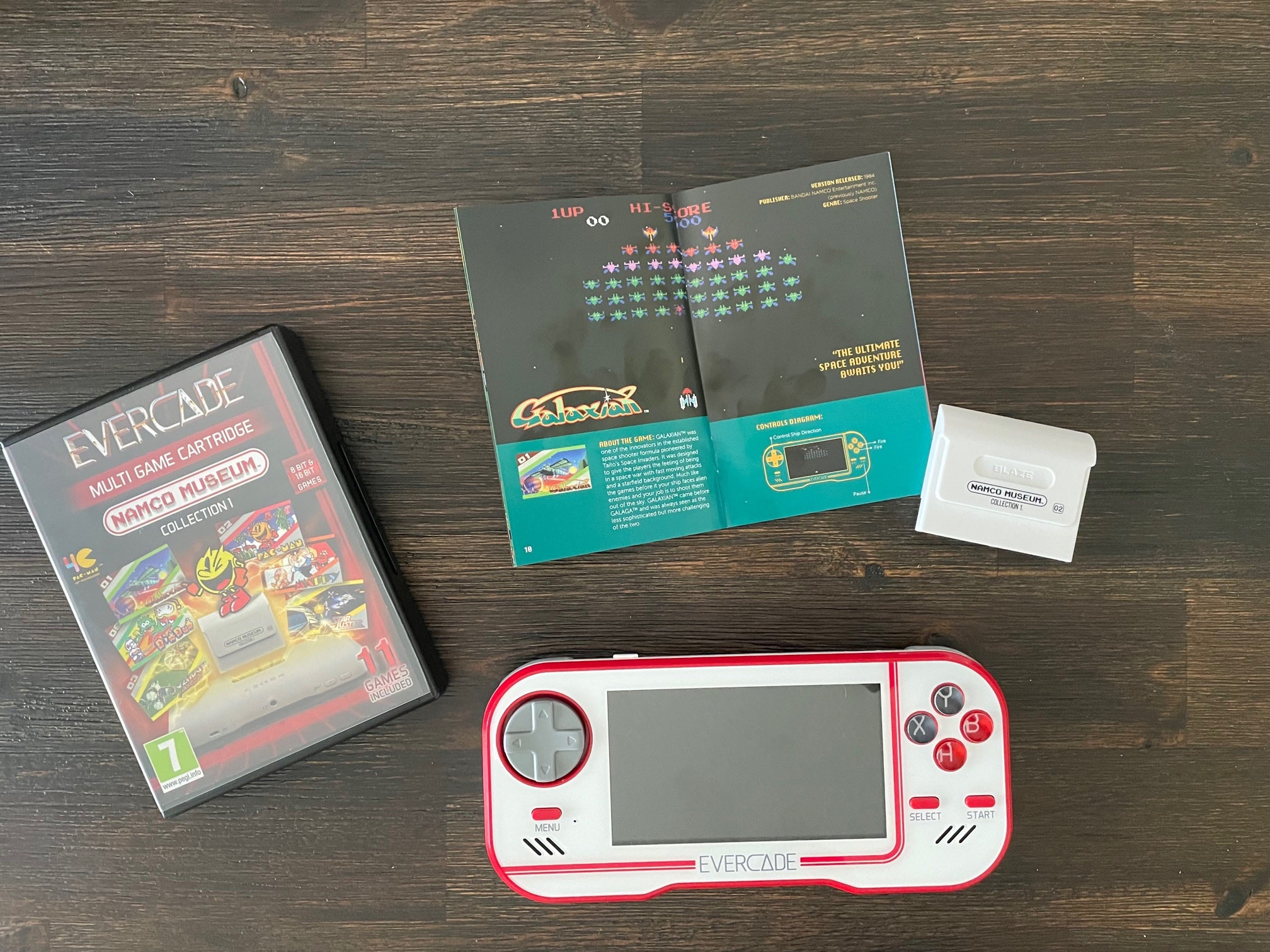 Gameplay was smooth for each of the games I played across the three included collections, and bouncing between games couldn’t be easier. What’s nice is each game features six save states that can be accessed at any moment, allowing you to easily pause and return to a game you were in the middle of without being forced to completely restart. This is a welcome feature for many of the arcade games that don’t have built-in game saves. 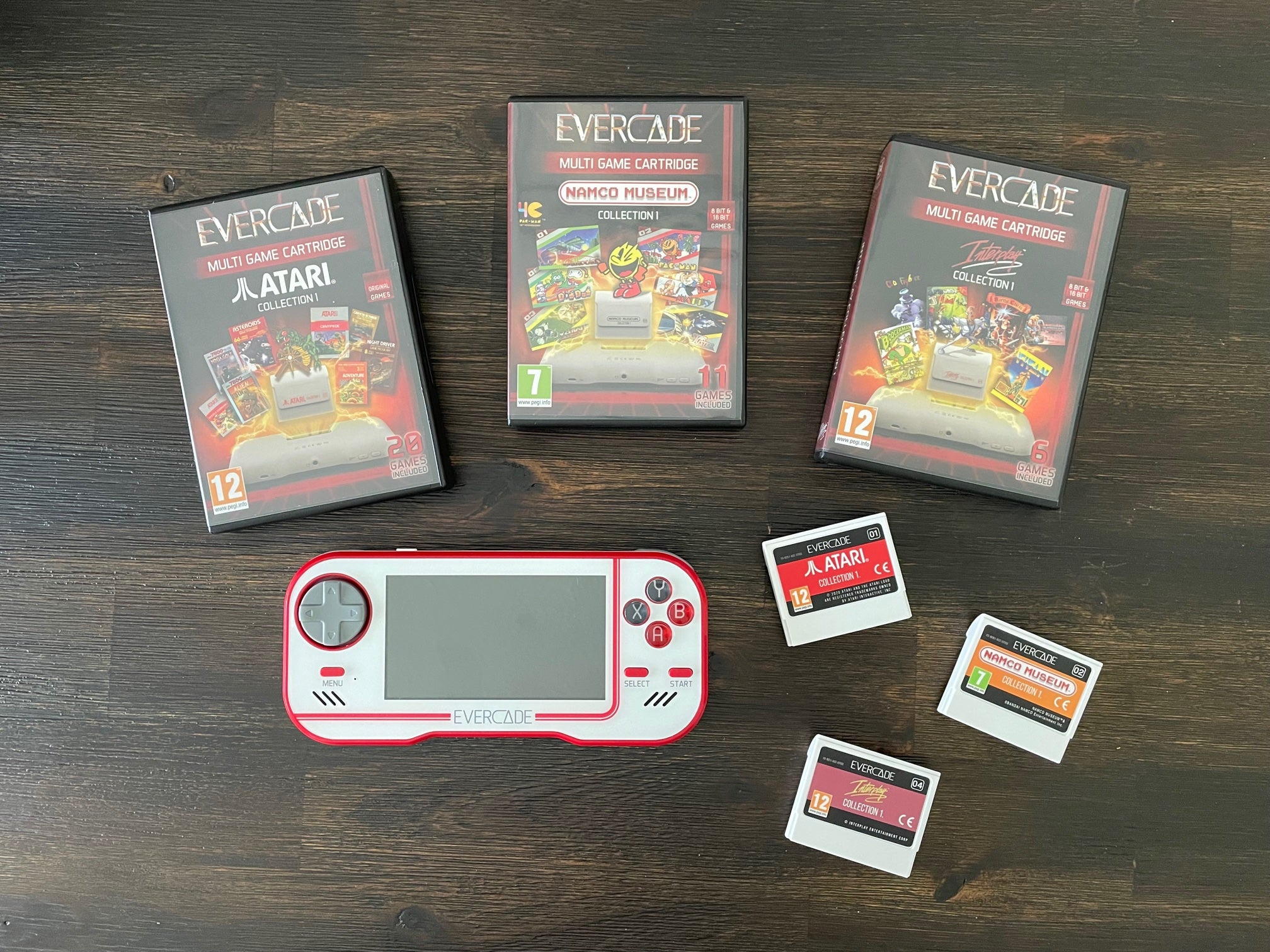 The rocker-style D-pad feels very similar to that of the Sega Genesis’ controller. It’s incredibly easy to press in any direction and can easily be rotated in a circle. While this is great for some of the platformers and fighting games, I often found I was making mistakes in the traditional arcade games that require more precise directional input, specifically when sliding my finger across the D-pad to quickly change directions as they didn’t register. Other than this small issue that can easily be remedied by pressing each input instead of sliding over to it, the D-pad and face buttons feel responsive.

Since the Evercade Handheld is manufactured in the UK, it’s primarily sold through UK retailers such as Amazon UK or GAME for a suggested retail price of 59 pounds (or roughly $85 USD) not including international shipping.

It can also be found at US retailers such as Amazon and Best Buy for $99, although the collection includes the Data East Collection 1 in place of the Namco Museum Collection 1.